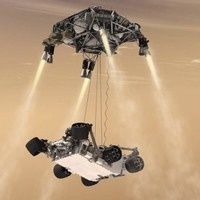 Dr. Scott Roby explores the scientific and cultural fascination with the red planet Mars over the past century or so.  Mars is the most popular target for interplanetary robotic missions. The question of life on Mars has evolved from mere speculation to serious scientific investigations for any evidence. With emphasis on the rover missions of the recent past and updates on the new Perseverance mission., the presentation also will review commercial and government plans to send humans to Mars in the near future.

This presentation was fun and I learned a lot!