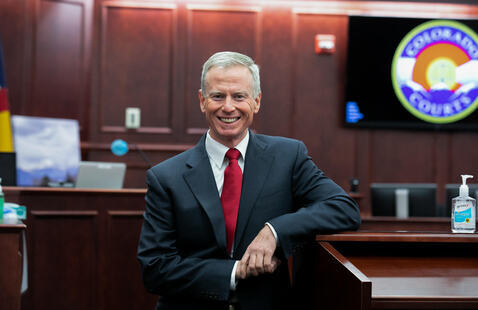 George Brauchler, District Attorney for Colorado's 18th Judicial District, served as the lead prosecutor in the trial of the person accused of committing the July 20, 2012 mass shooting at the movie theater in Aurora, Colorado. In this presentation, Brauchler walks the audience through the process - from arrest to the perpetrator's conviction and sentending - from his unique perspective. Audience members will get first-hand insight to the challenges faced from prosecuting such a public case and how Brauchler and his team were able to secure a conviction and bring justice to the many who were impacted on that fateful night.

Brauchler was born in Staten Island and raised in Lakewood, Colorado. He currently serves as a Lieutenant Colonel in the U.S. Army Reserve and previously served as the Chief of Military Justice for Fort Carson, as well as with the 4th Infantry Division and the U.S. Division-North in Iraq. In more than 18 years, Brauchler has secured verdicts in more than 140 cases at the state and federal levels as well as in military court. In addition to his role as District Attorney, Brauchler regularly adjuncts at the University of Denver College of Law, Colorado Law, and the U.S. Army and U.S. Navy JAG Schools. He is recognized as one of the most prolific speakers on trial advocacy in the nation and regularly trains others on this subject matter.

This event is proudly sponsored by the David F. Cutler '74 Public Justice Excellence Fund and the Department of Criminal Justice at SUNY Oswego.

To be provided to confirmed registrants