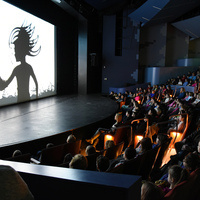 "Kim Dotcom: Caught in the Web" (2017) is a documentary about the man (born Kim Schmitz) who started out as a tech entreprenuer, but later gained infamy as a self-proclaimed hacker and and phreaker, a man accused of insider trading, and as the owner of Megaupload, a defunct cloud storage service hosting pirated content. Film two of two shown by Campus Technology Services recognizing National Cyber Security Awareness Month.  Free admission and popcorn.