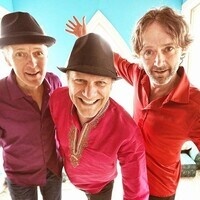 Demonstration and Discussion with Sultans of String: Performing and Producing Live Virtual Concerts

Join a virtual demonstration and discussion with upcoming guest artists Sultans of String, focused on performing and producing live virtual concerts. In a typical year, Sultans of String would be busy touring around the world, thrilling listeners with their genre-hopping fusion of Celtic reels, flamenco, Gypsy jazz, Arabic, Cuban,and South Asian rhythms. However, with restrictions caused by the global pandemic, this creative group has spent the last year transitioning and perfecting the art of delivering virtual performance in their home studio.

The discussion will include a look at the sound and video equipment utilized to effectively live stream their performances on widely available and free platforms, as well as software and special effects used to incorporate multiple camera angles, recorded audio and visuals, and much more. Sultans of String will also discuss the importance of being flexible as musicians in the modern age, and how they think the skills and techniques they have learned will change the way they perform in the future.