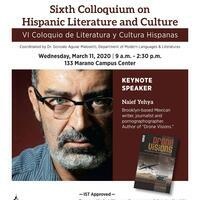 "Drones: Hunting Humans from the Middle East to the Southern Border Abstract," by Naief Yehya

This is SUNY Oswego's 6th Spanish Colloquium, with a keynote address by Naief Yehya (Mexico City, 1963), a Mexican-Iranian engineer, journalist, writer and cultural critic who has lived in Brooklyn since 1992. His talk will be based on the increasing militarization of technology and the use of drones at the border to enforce state-sponsored humanitarian and environmental violence.