Julia's Amazing Race Around The World 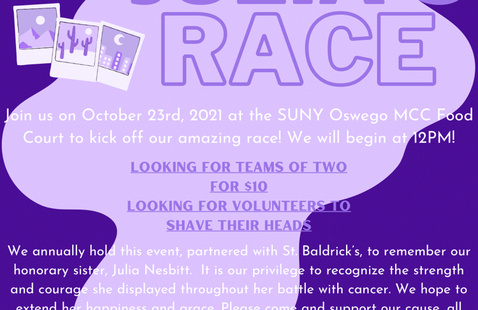 Marano Campus Center, Food Court View map $10 for groups of two
Add to calendar
Save to Google Calendar Save to iCal Save to Outlook

Have you ever thought about how you could help out people in need? Have you ever wished that you could make a difference in a child’s life? Alpha Delta Eta, an organization on the SUNY Oswego campus, aims to help the student body and the Oswego community to the best of their abilities.

In 2015, Alpha Delta Eta learned that an Oswego graduate had a daughter named Julia who had been diagnosed with brain cancer.  With her family struggling to pay for medical bills, the sorority decided to do everything in their power to help a sister in need.  This is where “ADH & Julia’s Amazing Race Around the World” began. At the first race they named Julia an honorary sister. In January 2016, the sorority received the devastating news that Julia had passed away at just 13 years old.  They continue to hold this event annually in her memory to honor her fight and to continue to help other children fighting this same battle.

The Amazing Race will take place at noon on Oct. 23. Part of this event will include head shaving for the St. Baldrick’s Foundation. The proceeds raised by this event will go to childhood cancer research.  The race will consist of teams of two (only $10 for pairs to join)running around campus solving mental and physical challenges. The winning team will receive a grand prize. Part of the proceeds will be going to the St. Jude’s Hospital in Charlotte, North Carolina where Julia was treated as a thank you for the hard work that they do and to hopefully help future patients with treatments.