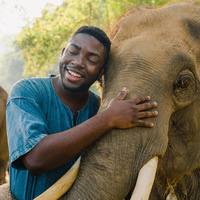 Mic-Anthony Hay is a visual storyteller born in Queens, New York, in the 1990s, to Jamaican parents. His family moved back to the island when he was 10-years-old. There he grew up and fell in love with technology, travel, and storytelling. When he returned to the USA as a teenager, he pursued a degree in journalism from SUNY Oswego. In 2017, SONY invited Mic-Anthony to join the Alpha Imaging Collective. He has been an Ambassador for SONY ever since. He states: "My goal is to use the latest imaging technologies to make still and motion pictures that help people have a greater understanding and appreciation for the planet we call home."

In 2019, Forbes named Mic-Anthony to their Top Travel Influencers list. The award was for a video of the Taughannock Falls State Park in Upstate New York that went viral on social media. It's a mesmerizing video that captures the seasons changing from autumn to winter.

This event with Mic-Anthony Hay will be interesting to a wide variety of students. Including Journalism, Photography, Art, Broadcasting, Cinema & Screen Studies, English and Creative Writing majors. Mic-Anthony Hay has worked as a travel photographer in Alaska and Thailand for SONY. And in Norway and Iceland for SUNY Oswego's study-abroad program. For this reason,. study-abroad students might also want to attend this event.

At his core, Mic-Anthony Hay is a storyteller which will appeal to everyone.