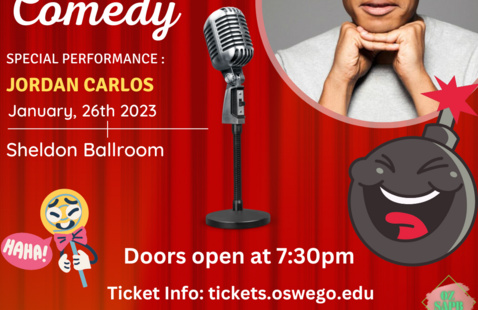 Sheldon Hall, Ballroom View map Free Event
Add to calendar
Save to Google Calendar Save to iCal Save to Outlook

Comedian Jordan Carlos will perform a stand-up comedy routine in Sheldon Ballroom on Thursday, January 26 at 8 PM.  Tickets are available via the box office.

Jordan recently served as a writer and on-air contributor for Comedy Central’s "The Nightly Show with Larry Wilmore." He is well known for his hilarious commentary on various MTV and MTV2 series, including; "Guy Code vs. Girl Code," "Guy Court," 'Charlamagne & Friends" and "Ain’t That America." Additionally, Jordan can be seen dispensing his comedic wit on VH-1’s "I Love the 2000s"
and the popular Yahoo digital series, "Mansome."

Jordan’s other TV credits include Comedy Centrals’ "Broad City," "The Colbert Report" and "Michael and Michael Have Issues"; Showtime’s "The Affair" and "Nurse Jackie"; HBO’s "Girls"; NBC’s "Mercy"; ABC’s "Ugly Betty"; and Adult Swim’s "The Eric Andre Show. " In addition, he was a series regular on
the MTV series "I Just Want My Pants Back" and the ESPN scripted comedy series, "Mayne Street" opposite Kenny Mayne, Aubrey Plaza and Ben Schwartz.
He can be seen in the feature films "Sleeping With Other People" opposite Jason Sudeikis and Alison Brie, Noah Baumbach’s upcoming "Yeh Din Kah Kissa" opposite Ben Stiller and Adam Sandler, Gillian Robespierre’s" Landline" and "About" Ray opposite Naomi Watts.

Jordan lives in Brooklyn and continues to perform his insightful and hilarious stand-up comedy in venues around the country.