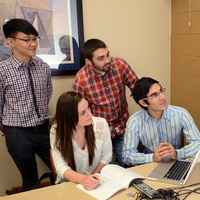 This Sunday at 6pm in the Tyler Lobby, come and find out about this storytelling shadow puppet film cross over. Thanks to generous Artswego funding, world-renowned master puppeteer Chris Mullens will be  at SUNY Oswego for a five day residency to work with art, theatre and film students to create a shadow puppet film, based on Appalachian folklore. Throughout the days and in the evenings of Monday Sept 9, through Wednesday, Sept 11, he and participating students from theatre, film and other areas of interest, will work on building puppets and shadow puppet scenery, while rehearsing four vignettes for filming. Meanwhile, Film students will capture soundscapes, foley sound and behind the scenes footage.

On Thursday, Sept. 12, the piece will be filmed, on 16mm film, developed the film through an experimental process and edited it for the screen. At 7 p.m. Friday, Sept. 13, the main event will feature Appalachian storytelling, and a screening of the completed short film, along with a behind the scenes”presentation of its creation and a live puppeteering demonstration by Mullens followed by a brief audience talk-back. The talk-back will highlight the world history of puppetry and its ability to represent what the human body alone cannot, as well as the process of creating this project from Appalachian folklore, specifically in regards to the supernatural elements depicted and the puppets unique ability to move beyond the human, to tell a super-human story.

First meeting will be held 6 p.m. Sunday Sept. 8, in the Waterman Theater lobby.