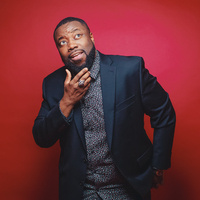 Tamar Greene: What is a Legacy

ARTSwego and Ke-nekt' Chamber Music Series present SUNY Oswego Alumnus ('09) Tamar Greene, in a special live virtual concert featuring songs that reflect the substantial impact on the African American presence in theater. Selections include "Rain" from Once on this Island, an original arrangement of "Make Them Hear You" from Ragtime, and an original song titled "In My Arms". Currently, Tamar Greene is playing the role of George Washington in the Broadway company of HAMILTON. In 2018, he was part of the First National Tour and North American premiere of LOVE NEVER DIES, Andrew Lloyd Webber’s spellbinding sequel to PHANTOM OF THE OPERA. As a proud first-generation American, born of Jamaican and British parents, Tamar is a versatile artist whose musical passions mirror his eclectic background. As a writer, arranger, classical pianist and an opera singer, he combines much of his inspiration from Classical music, Reggae, Hip-Hop, R&B, Blues, and Jazz.

You're not going yet!